The Value Of A Brand

“Playboy’s logo showing a rabbit head wearing a bow tie is one of the most recognisable in the world. The company makes most of its money from licensing it around the world to sell products including toiletries, drinks and jewellery. About 40 per cent of merchandising income is generated in China, where the magazine itself is not even available, so the precedent is out there.”

Designed by Art Paul, the magazine’s first art director, the rabbit head has appeared on the cover of every issue of the magazine since the second. Hugh Hefner, the creator of the ‘playboy’ magazine, once explained, ‘I selected a rabbit as the symbol for the magazine because of the humorous sexual connotation, and because he offered an image that was frisky and playful. I put him in a tuxedo to add the idea of sophistication. There was another editorial consideration, too. Since both ‘The New Yorker’ and ‘esquire’ use men as their symbols, I felt the rabbit would be distinctive; and the notion of a rabbit dressed up in formal evening attire struck me as charming, amusing and right.’ added Art Paul, ‘if I had any idea how important that little rabbit was going to be, I probably would have redrawn him a dozen times to make certain I was doing him justice, and I suppose none of those versions would have turned out as well as the original. As it was, I did one drawing and that was it. I probably spent all of half an hour on it.’ 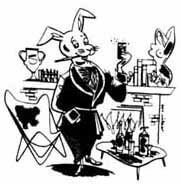 A great logo isn’t a marketing panacea but it will help you quickly get attention, communicate the key value proposition of your business and be memorable. When people see your logo for the first time, it should create a desire to investigate, it should entice, it should invite you to check it out further.